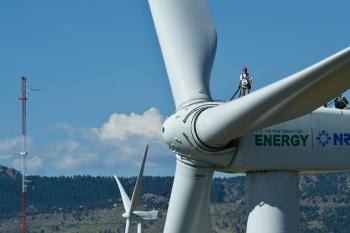 Illinois appears to have a lot of potential for growth in wind energy.     One area that some say is ripe for development is wind farms off the shores of Lake Michigan.   However one expert is not so bullish on the idea.

A federal study says Illinois could become the number two wind energy producer in the next 30 years.
A few years back, the state created a commission to examine wind energy development out in Lake Michigan.

However, one expert doesn’t see that happening any time soon off the shores of Illinois.  David Loomis,Director of Illinois State University’s Center for Renewable Energy says it would be a tough sell.

“But I think the lake front in Illinois is kind of so sacred that people wouldn’t want to have their viewscape changed  to see wind turbines even if they are small and on the horizon?’

Loomis sees the potential for tremendous growth in wind energy..spreading from the current wind farms in north central Illinois southward into the more central parts of the state.  He also says solar farms would be a good fit for the southern part of the state.

A recent federal report says Illinois has the potential to become the nation’s number two wind energy producer behind Texas.    Loomis says if Illinois goes about it the right way, it could result in a lot of new jobs.

As technology continues to improve, Loomis says there will be more wind farms expanding southward in the state.   He also says southern Illinois is ripe for solar energy development. A number of experts will meet in Springfield to discuss the future of energy in October.